Feet on the ground, head in the clouds.

A place for thoughts and knowledge and writing to go; a place for science and fantasy to mix. Writing; words that stay. From the tallest tales to farthest reaches of the planet. Earth and its internal workings, its magnetism, its continents and its past extinctions. Stories & ramblings from the mind of Oliver Ferrie.

It’s Darwin Day today – the celebration held on the birthday anniversary of legendary scientist Charles Darwin. He was a pioneer in not just evolutionary science (which most people know him for) but in geology and exploration as well.

Last year I had the pleasure of enjoying Darwin Day whilst overlooking the stunning viewpoint of the Beagle Channel itself. This channel separates Chile from Argentina at the bottom of the South American continent, and is so named for the HMS Beagle, the ship that Darwin sailed through it in 1833. By a twist of fate, the ship was exploring the Argentinian coastline from late January onwards, meaning that Darwin was actually around these shores on his birthday.

It truly was amazing waking up in such a place, on such a date. It wasn’t something that had been planned – I was there to go on a tall ship expedition of my own, and February, in the height of the Southern Hemisphere’s summer, is the best time for it.

On the glaciers surrounding the channel, Darwin wrote:

“It is scarcely possible to imagine anything more beautiful than the beryl-like blue of these glaciers, and especially as contrasted with the dead white of the upper expanse of snow.”

There is a lot less snow visible these days at this particular time of year. The weather was a balmy ten degrees Celsius or so. I did expect more of a challenge, but I suppose the fierceness of a far-South summer can be left to the ages past.

After I realised it was Darwin Day, I spent some time reading his voyage journal, in particular I was interested in what he had to say on this part of the world. His observations on geology are truly remarkable, but in stark contrast, as can be expected for a man of his time, he had some rather disagreeable opinions of the local people who lived there, the Yámanas. This indigenous group still lives in this part of the world, mostly thriving off the tourist industry now – us Europeans didn’t wipe them out completely, but we did do some awful things based on our assumptions. So one thing we should take away is that we must pay attention to the difference between due scientific process and personal/social bias, especially when it comes to listening to important and knowledgeable figures.

The collective name for this region, the southernmost tip of South America, is Tierra del Fuego, the land of fire. Although it wasn’t the HMS Beagle’s first trip down there, having completed a preliminary hydrographic survey in 1830, it was Darwin’s trip that brought this land to the attention of the Western world, along with other places he visited on this voyage such as the Pacific Galapagos islands. 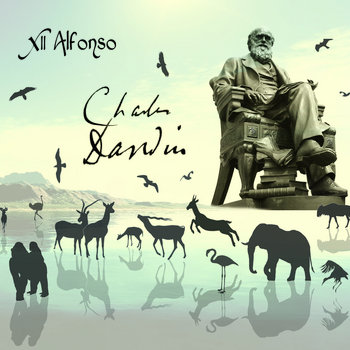 The prog rock band XII Alfonso have created an album called Charles Darwin which tells his entire life story story through an epic 52-song compilation. You can listen to the entire thing for free on Bandcamp, and I’d strongly recommend doing so (and maybe chucking a few pounds their way) – in particular check out Track 15, ‘Tierra del Fuego’.

I would encourage everyone to delve into Darwin’s journal this Darwin Day. For its scientific observations, for Darwin’s personal struggles, for the inextricable socio-historical undercurrent, for the fact that he had the idea of getting out there to find out more and went for it, despite the dangers. Human curiosity in a nutshell. It’s important to not forget this stuff – it’s part of our human history, and a big part, at that. Share it with people, tell your kids: think, and get others thinking too.