Feet on the ground, head in the clouds.

A place for thoughts and knowledge and writing to go; a place for science and fantasy to mix. Writing; words that stay. From the tallest tales to farthest reaches of the planet. Earth and its internal workings, its magnetism, its continents and its past extinctions. Stories & ramblings from the mind of Oliver Ferrie. 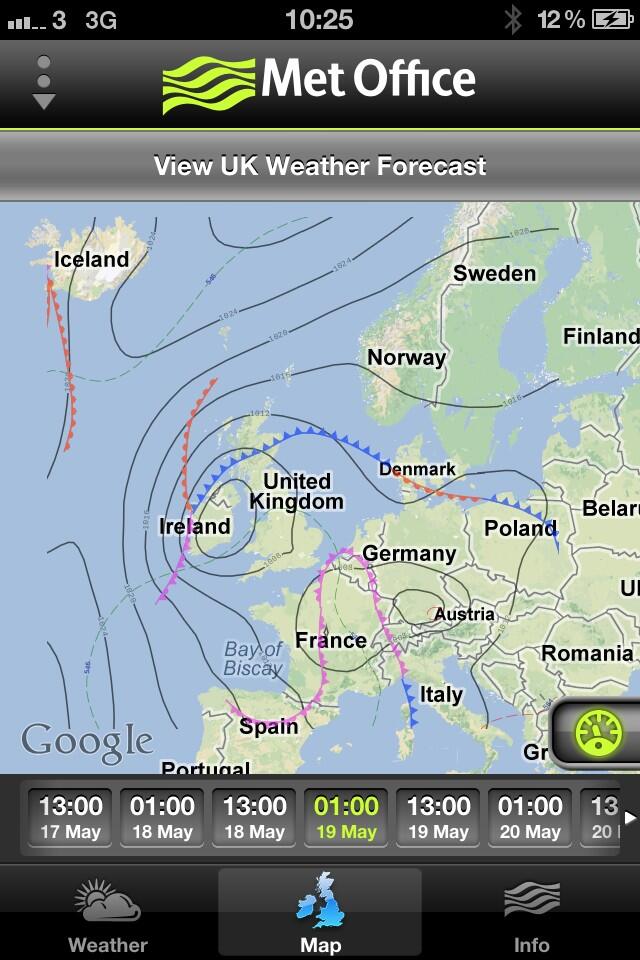 Something interesting is happening in our skies.

It may not look like much from down here, where all we can see is a seemingly-endless sheet of stratocumulus, but way up there, a very strange pattern has taken shape.

Usually our British weather undergoes the following kind of pattern: a single spiral of low-pressure air sweeps in from the sea, usually from Iceland or the Gulf Stream ways, giving us rainy, ‘miserable’ weather. Then a spiral of high-pressure air moves up from Western Europe to give us more amiable weather. We alternate between the two. Which is why Britain is often rainy, with short breaks. Pretty simple.

But since last week, something interesting happened. A low pressure spiral of air passed over the UK – and got stuck. Another low pressure spiral joined it but did not move it completely out of position. Instead the spiral movements of the air sort of provided reinforcement for each other – a positive reinforcement cycle – and kept each other circulating over the same patch of land, namely, Britain and North-Western Europe.

There was even a point on the Met Office charts for late Wednesday night which showed three low pressure zones together over the UK!

While it’s not the weirdest thing in the world for there to be more than one low pressure zone in a weather pattern, it is strange for these zones to maintain each others’ presence in the same location for such a long period of time! It’s been a week now, and the charts indicate it’ll be at least another week before they manage to shift.

Check out the Met Office’s surface pressure animation for the next few days and you’ll see what I mean more clearly.

The UK sits at the forefront of the battleground between cold polar air and warmer subtropical air. The line drawn between the two is called the Jet Stream; you’ve probably heard of this thing before in the news every so often.

Well, something the Jet Stream does is it undergoes these oscillations: wave-like patterns which make it change position. You might have heard of the North Atlantic Oscillation (hint: it’s also the name of a band) but what we’re going to focus on here is the Arctic Oscillation. Now, when the oscillation is in one phase, the Jet Stream may be located further up to the north of Scotland, drawing up warmer air over most of Britain; when the oscillation is in another phase it may be located closer to London, pushing down polar air over most of Britain.

At the moment we’ve got what we call a neutral oscillation – which is not ‘no oscillation at all’, as you may think the name implies, but rather means it’s mid-way between positive and negative. And it’s been trending more and more towards the negative over the past decade.

This set of spinning twins is an example of this in action. The Jet Stream’s effectively turned into a Big Dipper, and a couple of low pressure zones have gotten entangled in one of the dips – right over our heads here in the UK. Lucky Britain, eh?

We should be operating under warmer weather more typical of British Summer Time now – and we did experience a nice unusual warm period almost a month ago now. Remember those numerous cloudless days before all this bad weather kicked off? Again, this was due to part of these natural oscillations, in which the waves were placed so that warm, high pressure Mediterranean air got ‘stuck’ over our heads for almost a week (but you never hear talk of oscillations when the weather’s good).

That warm period was a boon for plant life, and now plants seem to be suffering from this unexpected cold in many regions. Especially after another cold winter , the poor things aren’t doing too well! Same goes for animals – lamb birthing etc.

And of course, rain tends to ruin people’s outdoor plans! It’s not nice either for those with arthritis or something similar. Time to bring out the warm socks again in many cases!

It’s probably time to admit that this is one of my favourite kinds of weather. With low pressure zones, especially when it’s got a good old combination of cold, warm and occluded fronts all bundled up together, you get a huge variety of clouds. It’s a cloud smorgasbord. Every day I have been able to revel in an array of dramatic cloudscapes, from the puffiest of cumulus towering in intensely sunlit skies, to wispy cirrus preceding walls of blanket-grey stratus clouds. Bands of rain that sweep over in only a couple of hours or even minutes, allowing you to gaze upon the raincloud leaving, with fibrous, veiled tendrils of rain trailing beneath it like some sacred shroud. Unexpected rainbows against cauliflower backdrops, huge anvil nimbuses with mammatus udders, the strangest shades of blue at sunset.

If you need some more convincing, just check out this luscious slideshow from the BBC, displaying recent lenticular clouds over Yorkshire.

So it’s hard to tell how long it’s going to stay like this, but it isn’t forever. If anything, when the next high moves in, we will enjoy and appreciate it all the more.